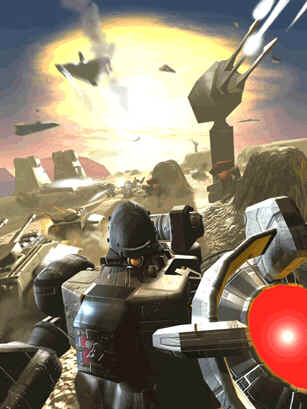 Take me to the News

Welcome to AI Central! Home to pretty much every TA and TA:K AI on the net, plus a few extras that help them to be even more deadly than before.

AI Central aims to bring you the biggest, widest, and most up to date selection of AI's for Total Annihilation and Kingdoms. I play them, tell you what I think, and then rank them along with every other AI to let you know what's the best, and what only ranks alongside the rest.

I aim to help in any way possible, if you have a problem, no matter what it is, please feel free to e-mail me, I don't bite or flame. If you have an AI you want people to try, send it in. Want to give your opinion on someone elses AI? Feel free to write a review, if it's good enough it'll be put on the site.

At AI Central I wish to make everything as easy as possible for you, from the articles area which gives anything from instructions for installing an AI, to general musings over AI in general, to the AI Packs which can make your current AI that bit harder. Everything you need to improve the skirmish experience is right here.

If you're looking for an AI that isn't here, let me know and if it exists, I'll find it and add it to the collective.

Got an AI you've made? Want the TA/TAK world to see it? Well e-mail it to Quitch, please include a 50-100 word description and a note saying if you would like your name turned into an e-mail link along with the address that should be used. Finally, add the name and URL of any MODS it may support.

Many thanks to dANGER BOY for alerting me to Switeck sneaking out version 16 of Mostly Harmless a few years ago. I've been putting it through its paces and it's a shame it got such a quiet release because it's a massive improvement on version 14, learning the lessons that Insane AI taught us all so long ago and finally bringing itself among the top tier non-cheating AIs for Total Annihilation.

I'm glad to announce that AI Central is back online, hosted now by TA Universe whom I once turned down because I thought Planet Annihilation would outlast them. Funny how things turn out. I hope you enjoy this throwback to an era of web design which has - thankfully - long since past. I've stripped out the old ad code, but apart from that everything is as it was, right down to the many links to sites long dead. All the AIs are still here though so dig in!

I've added the TA Demo Recorder patch to the various downloads section as it also allows for multiple AIs per-player in multiplayer games as well as sharing LOS with the AI, something I always wanted in team games.

Earlier this year I was approached by Brad Wardell of Stardock who are now distributing Total Annihilation via their online service, Impulse. and he wished to include the Queller AI. Unfortunately it turned out they didn't have the modification rights they thought they did and the plan fell through, but not before I spent a month polishing up a number of rough elements in Queller.

I am pleased to announce that Queller TA & CC v17 was the result, lots of little improvements, some differentiation of Arm and Core plans, and support for the latest version of TA Bugfix, an addition I strongly recommend to get the most out of my AI. On top of that it now supports AI Packs 6 and 8 so you can turn it into a cheating AI if its default incarnation is not enough for you. Enjoy!

One of the best non-cheatings AI around has finally received a much deserved update. As what will likely be his final act in the TA community, LiquidMetal has released version 3 of his LiquidMetal AI. After 2.4 strayed too far from the ideals of its predecessors, v3.0 is a refreshing return to form, with the AI once again playing a game focused on rapid and aggressive expansion. There is no other non-cheating AI that expands as fast as this, and many humans would be put to shame. While many of the niggles I had with v2.0 carry over, it does seem to play a slightly improved game, being better at putting together an attacking force. This is an essential AI for any collection.

If you are getting any "File not Found" error messages, use your back button and try the link again. There is a known error with FilePlanet where sometimes it will falsely report a broken link.

I've corrected an error in the v16 release of Queller TA & CC which would affect its performance on air maps against anyone using TA Bugfix. If you don't use TA Bugfix while playing with Queller TA & CC v16 then I would strongly advise you to. It won't launch nukes, nor use bombers, without the latest beta of TA Bugfix. Find it at Switeck's Junkdrawer.

If you've already downloaded the new release, I'm afraid you'll need to download it again to get the fix. I'd also give FilePlanet 24 hours to swap out the old files for the new ones before attempting to download.

Its been a while since I said I was going to release Queller v15. Well, the wait is over. Its taken a hard drive restore, but I've finished it, and along the way its picked up a version number. Queller TA & CC v16 is now ready for download. Featuring an improved Default profile which aims for the aggressiveness of Queller CC v15 beta with the expansion of LiquidMetal v2.0. The Metal profile has been reworked and will now pump out units faster, hit level two quicker, and have super weapons up before you know what's happening. I've even rewritten the AirBattle profile from the ground up. AIs are never very good in this arena, and I don't think Queller TA & CCv16 will tax too many people, but it has hit the level now where it's about as good as a non-cheating AI is going to get.

I've restructured Queller a little too, with the AI units all being dropped. Queller now takes advantages of the things TA Bugfix provides, including AI nuke silos. Both the TA and CC versions of the AI have been combined, and Quell has been dropped, since it is no longer necessary. These changes will allow you to use Queller TA & CC in your multiplayer games without worrying about the other players having a copy. On top of that, it will improve the mission AI greatly without any clunky tacking on of its own units.

Queller FB has always had a hidden addon. For those who still haven't found it after all these years, I've included it on the AI Packs page.

All the Queller AIs have now been moved onto the relevant AI pages, rather than having their own dedicated page. The same is true for Ultimate AI.

In other news I found during my testing that LiquidMetal v2.0 was failing to install under TA-Mutation. I have now uploaded a TAM copy that works. For those wondering why we don't host LiquidMetal v2.4 this is done at the authors request. He stated he believed 2.0 to be the superior copy.

If anyone knows how I can get in contact with TheScythe (Explosives AI), RpC_mklevold (Insane AI), or LiquidMetal (LiquidMetal AI) please drop me a line. Both Explosives and LiquidMetal have newer versions I am keen to get my hands on, while I would like very much to speak to the Insane AI author.